Hermann Nitsch is one of the founders of the Viennese Actionism Movement and the creator of the Das Orgien Mysterien Theater (Theater of Orgies and Mysteries) which indissolubly combines life, art, philosophy, music, theater and painting.
In Crucifixions two of his most important drawings are exhibited: The Last Supper (1976-79) and the Deposition in the Sepulcher (2007). Two fundamental moments in the life of Christ, where the humanity of God’s son prevails, become the synthesis of the creative process of the Viennese master, which represents human existence in its two aspects, Apollonian and Dionysian, spiritual and sensual. These are the words of the artist on the Eucharist, which fascinates him because of its fusion of body and soul: “for me, - says Nitsch – starting from the factual data regarding the cross, there has always been a connection with Greek tragedy, Christ is the hero who fails, but he succeeds in redemption, he resurrects, the blood sacrifice of his death on the cross is transfigured, elevated through the bloodless repetition of his sacrifice in celebrating mass. His flesh and blood become nourishment which grants everyone eternal life. The sacrifice must be celebrated during the Eucharist in order to follow the pathway to elevation of all sacrifices.” (from The Last Supper by Hermann Nitsch, Prinzerdorf, 2000).
In the Central Hall of Palazzo Montanari, eight big canvases (two meters by three each one), ready to shape a parallelepiped, a “cell” in the middle of the room, where the colors of different consistencies are squirted, spread, dropped and poured from above. Among the works, even two red canvases made in 2012 on the occasion of the 64° Malaktion (action-painting) by Nitsch at the MART Museum in Rovereto and exhibited the year after at the Museo Archelogico in St. Mark’s Square, on the occasion of the 55° Venice Biennale. These works sum up the Wagnerian ideal of a complete work of art – a whole ensemble between aim and process – from which Nitsch has always drawn inspiration.

Some of the works by Hermann Nitsch exhibited at Palazzo Montanari in Bologna. 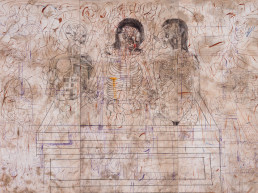 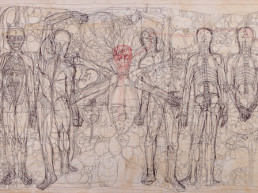 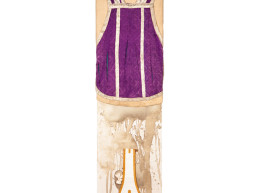 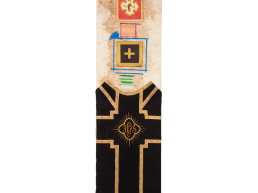 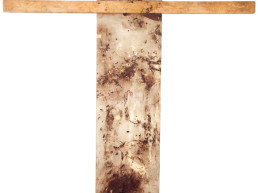 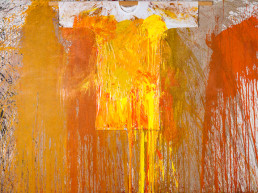 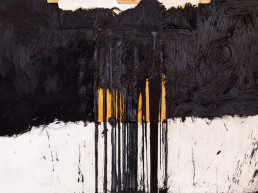 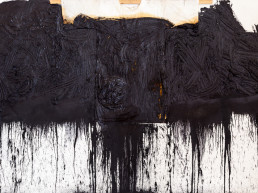 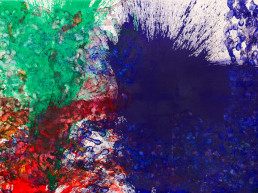 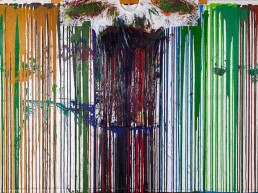 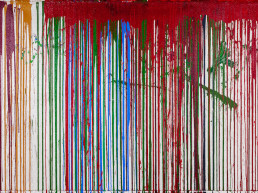 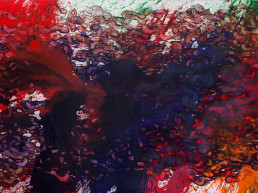 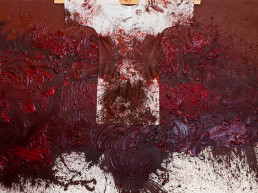 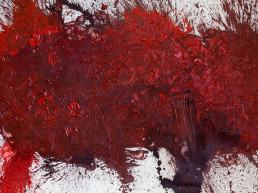 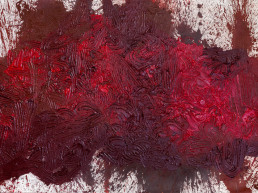 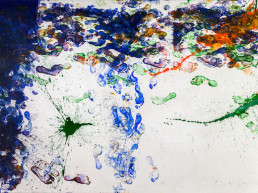 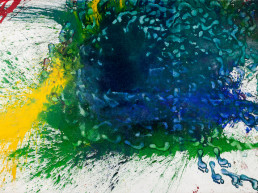 The origin of Nitsch’s expressive style, a playwright, a composer, a philosopher as well as visual artist, is complex, but it is first and foremost linked to an act of rebellion against the devastating silence enveloping Austria after the Second World War; almost a plea towards Nitsch’s gushing, cathartic explosion of vis creativa, in an epic and seemingly brutal shape. In order to grasp the sense and intensity of life – has said Nitsch – it is necessary to be aware of the emotional fringes which define its borders: from ecstatic fervor to animal suffering.

Nitsch’s actions are to be intended as spaces where to live a deep experience to which many hundreds people take part; his one is a complete work of art linked to the psychoanalytic principle of Abreaktion, that is the emotional discharge which allows a subject to remove the consequences of dramatic events and to awake to imposed taboos and deleted desires.

“My actions – Nitsch writes in The Theory of Colors – are the start of a walk towards color, towards color’s deepest secret. Colors are torn off from the heart and the entrails of slaughtered animals. The flesh becomes succulent flowers’ pulp. Color is made from the violence and the light of nuclear fission. A monstrous strength and the fury of creation make everything shine, they accompany colors towards their birth, things towards their display, towards their chromatic vitality which breathes. Next to colors, perfumed flower essences are born, the sweetness of pollen. Only when all of them – galaxies, solar systems, the numerous suns and worlds – have woken up to the shining and chromatic inebriation, only then the supreme shape of the living reveals itself, the bright figure of the Savior dressed in white, who once again woke up to light, glowing face of the smiling Savior, resurrected (Isenheim altarpiece). His face is surrounded by the light of all the suns of our cosmos, in the background the starry sky.”